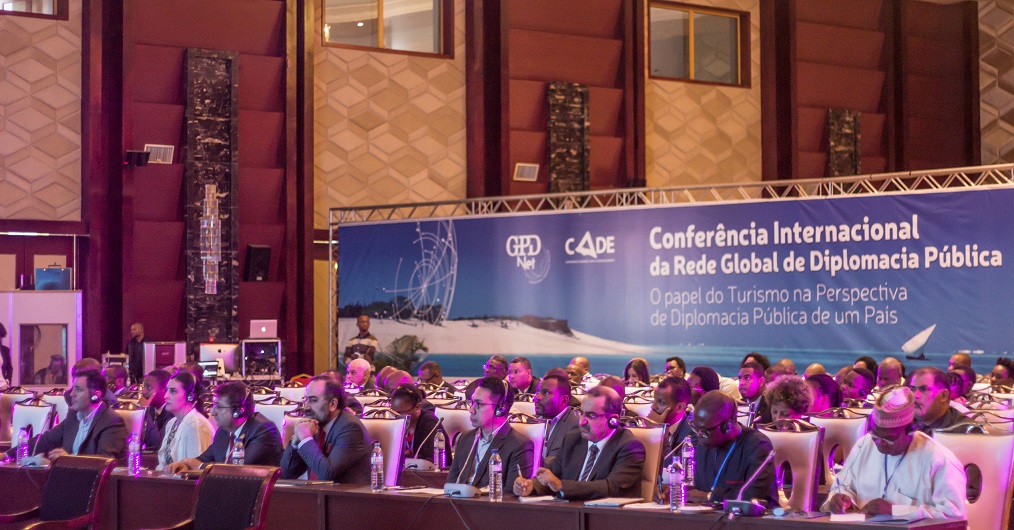 The Role of Tourism in a Country: A Public Diplomacy Perspective Conference was held in Mozambique’s capital Maputo on 26 March 2018. The Conference was organised by the Mozambican NGO ‘CADE’ as a member of the Global Diplomacy Network (GPDNet) the term presidency of which is currently undertaken by our Institution.

The Conference started with the opening speeches delivered by senior officials including Turkish Ambassador to Maputo Zeynep Kızıltan, Maputo Mayor Cassamo Nuvunga and YEI Strategy Development Manager Bülent Üçpunar. Cassamo Nuvunga who started his opening remarks by extending his thanks to GPDNet member states, said tourism, which was the main theme of the conference, had a crucial dynamic potential in changing and improving the international perception of Mozambique. Noting the economic, cultural and social outcomes of a tourism that is managed with strong strategies, Nuvunga said there were many well-known and influential countries in the world today which were making a very conscious use of the strong potential of tourism and stressed that there were many things the GPDNet member states coming from different continents could learn from each other.

Mr. Üçpunar who spoke on behalf of our Institute started his speech by thanking CADE for organising the conference. Noting that the concept of culture was very influential on all aspects of our lives from the least to most significant parts, Mr. Üçpunar said culture manifested itself and created a distinctive understanding in a very wide spectrum in our lives, from the food we eat to the arts we create, from the music we listen to and to the film we watch. He said each country had an understanding and a strategy of tourism formed by its own internal dynamics and this was why tourism had a sensitive position in cultural diplomacy. He suggested that all countries should make positive use of the effects created by each other’s differences and remarked that a sustainable tourism understanding which can be benefitted by all could be ensured not by countries’ dominating and imposing their cultures on others but by creating empathy and interaction.

As well as Turkey, National Commission for the Arts and the Culture (NCCA) from the Philippines, Chiang Ching-kuo Foundation (CCFK) from Taiwan and National Institute for Cultural Orientation (NICO) from Nigeria and Katara Cultural Village Foundation from Qatar attended the conference where Prof. Dr. Nezih ORHON delivered a presentation on behalf of Yunus Emre Institute. During his presentation, Prof. Orhon remarked that Turkey was among the ten most visited countries in the world and by presenting documents and figures, he demonstrated what an important factor tourism was in promoting a country. Underlining that a tourism understanding that did not place local values in its centre would not be able to reach a global scale, Prof. Orhon noted that countries which make strategic use of technologic capabilities were more widely known in the world today because today people were able to exchange their views on the internet and play an active role in setting destinations. Furthermore, Prof. Orhon shared with the audience some examples of projects and campaigns Turkey has been running in this area which was highly welcomed by the participants and helped shaping the general course of the conference.

During the panels which were conducted after the conference, discussions and debates mostly built on the Turkey example given by Prof. Orhon and thanks to the questions asked by many participants, the conference had been very successful. There were also representatives and officials from various public offices and education institutions in Mozambique at the Conference which also staged a tourism exhibition where good practices in GPDNet countries and institutions were demonstrated in tandem with ongoing discussions at the conference.

The first day of the conference was ended with a gala dinner and on March 27, 2018, participants continued the conference with a wash up meeting at Radisson Blue Hotel. Taking the information shared at the conference as a reference point, participants made assessments on how the tourism potential of Mozambique – an important neighbour of South Africa which is one of the most visited countries in East Africa – could be strengthened and more tourists could be attracted. During the wash up meeting chaired by Bülent Üçpunar and Cassamo Nuvunga, representatives of GPDNet countries attending the conference expressed their views on this particular topic and on other possible projects GPDNet plans to undertake in 2018.

The GPDNet delegation was taken to a historical and cultural tour of Maputo in the afternoon after which they visited one of the most prominent tourist destinations in Mozambique, the Ithaca Island.

The conference and site visits ended with good wishes for future projects as the participating country delegations were seen off.